If you want to order or have more questions.

GenoExplorer™ Product KitsGenoExplorer™ microRNA array products enable you to perform miRNA assays and analyses in your own laboratories. The microarray platform is flexible and compatible with most hybridization chambers and microarray scanners. The products are highly sensitive and reproducible and provide the latest updated miRNA information. 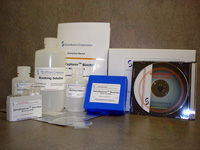 GenoExplorer™ microRNA array full kit provides a complete and easy-to-use kit with selective labeling procedure using total RNA (no enrichment required!) combined with a highly sensitive and reproducible assay. The arrays contain not only mature but precursor probes as well.

GenoExplorer™ microRNA array chip is composed of mature and precursor miRNA sequences and probes that covalently bind onto a 3-D matrix slide.

GenoExplorer™ miRNA qRT-PCR kit uses SYBR Green-based PCR analysis. The kit is easy to use and designed for most PCR instrument.

MicroRNATo meet the growing demands of receiving high quality experimental data in a short time, GenoSensor provides full-service microRNA expression analyses. Our experienced technical staff combined with robust experimental pipelines ensures high quality results with a fast turnaround. You can save time and money by sending your projects in for experienced handling in our laboratories.

MicroRNAs (miRNAs) are a group of small non-coding RNA molecules (19 - 23 nt) that are widely expressed in a variety of organisms in Eukaryotes and believed to negatively regulate their target transcripts. Primary miRNAs (pri-miRNAs) are much longer, they can be as long as 1000 NT, and are initially transcribed in the nucleus. They are processed into 60 - 110 nt pre-miRNAs by the dsRNA-specific RNase Drosha. The hairpin-structured pre-miRNAs are then transported to the cytoplasm and further cleaved by Dicer - a RNase III like enzyme, to a mature form of miRNAs. Mature miRNAs are 19 - 23 nt and functionally active. The single stranded miRNAs bind to their target transcripts associated with the RNA-Induced Silencing Complex (RISC) to participate in RNA interference (RNAi) regulation.

miRNA genes are transcribed to the primary transcripts, referred to as pri-miRNAs, which are polycistronic or monocistronic. The pri-miRNAs are processed into 60 - 110 NT pre-miRNAs by the dsRNA-specific RNase Drosha. The hairpin-structured pre-miRNAs are then exported to the cytoplasm and further cleaved by Dicer to an ~21 NT mature form of miRNAs. Mature miRNAs bind their mRNA targets associated with RNA-Induced Silencing Complex (RISC) and silence the gene expression.

There are two models for microRNA binding and gene regulations. In plants, miRNAs bind to mRNA targets by perfect or nearly perfect complementarity and cleave the target molecules. In animals, in contrast, most miRNA-mRNA pairings are not completely complementary, resulting in translation repression or arrest without degrading the mRNA targets.

Many studies have demonstrated the involvement of miRNAs in gene regulation, cell differentiation and tissue development. MiRNAs present differential spatial and temporal expression patterns. The proposed functions of miRNAs are diverse. They may be involved in regulation of mRNA stability and translation, heterochromatin formation, genome rearrangement, and DNA excision. miRNAs may represent a new aspect of gene regulation, and much more attention has been attracted to their expression profiles, targets, and mechanisms of action.

So far hundreds of miRNA sequences have been identified in C. elegans, Drosophila, mouse, and humans. Researchers have started to investigate the roles of miRNAs in signaling pathways and gene expression regulation in the areas of developmental biology, neurological sciences, cancer, apoptosis, and immune response.

Hanoun N et al. The silencing of microRNA 148a production by DNA hypermethylation is an early event in pancreatic cancinogenesis. Clin Chem 2010; Apr 29